Initiated by Arthur F. Williams, the Educational Director of the Indianapolis YMCA

During his summer vacation in 1933, Arthur F Williams, Eduation Director of the Indianapolis YMCA, first learned of the Toastmasters organization through some YMCA literature. As the founder of Toastmasters in Southern California, Ralph C. Smedley, was a YMCA Secretary and a leader in “Y” work, it was only natural for the “Y” to be quick to realize the value of such groups as a YMCA activity.who had shown great value in Toastmasters Clubs in conjunction with the YMCA activity.

Being interested in speech and speech training himself, “Art” quickly corresponded with Mr. Smedley concerning the method of operation and requirements to organize a club. “Art” presented the idea to a group of Indianapolis men who held their first Toastmaster meeting on December 14, 1933. The Group was officially chartered on February 15, 1934 as charter ##17.

The first president of the group was G.V. Carrier, the business manager of the Arthur Jordan Foundation of Indianapolis.

The Charter bears the name of A.H. Johnson, International President and Jean Bordeaux, International Secretary. This was the first charter presented by a club east of the continental divide of the United States. While the charter carries the name of “The Indiana Y.M.C.A. Club”, the club has been known from the very beginning as the Pioneer Club of Indiana. It is still in operation today. 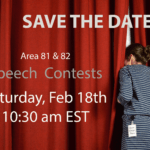