This year’s conference is now all Virtual,  You must register to get the zoom link.

We have a number of highly entertaining and educational speakers in the lineup.  Join us every evening to have a blooming good time.  It is best to register at least one day in advance.  Don’t miss out!

Must Register to get Zoom link

One of Hollywood's top Storytelling experts.

Pat performed and taught with comedic institutions such asThe Second City,and IO theatre iO Theater will show us how to increase our humor.

Marie combines here speaking, coaching and training with her love of handbells, and presents a creative way to address communication challenges

1st Runner-Up in the 2020 World Championship of Public Speaking, she has spoken in 32 countries about the power of voices and transforming the world with powerful messages.

How to use effective body language in critical communications.

The art of influence and "closing" the sale of membership.

Craig Valentine, MBA, an award-winning speaker, and trainer, has traveled the world helping thousands of individuals and hundreds of organizations reap the profitable rewards that come from presenting with impact and persuading with ease.

As a motivational speaker, he has spoken in the United States, Taiwan, Canada, Jamaica, Qatar (Doha), England, Bahamas, Hong Kong, China, Saudi Arabia, Kuwait, Indonesia, Japan, South Africa, India, Sri Lanka, and Australia giving as many as 160 presentations per year. He is the 1999 World Champion of Public Speaking for Toastmasters International. 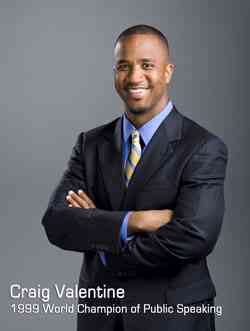 Mark Gai is a highly sought-after executive communication coach and TEDx speaker. He is an expert in body language, leadership development and persuasive communication. Mark reached the semi-finals of the largest public speaking contest in the world, and placed in the top 100 speakers worldwide according to Toastmasters International in 2015. His leadership podcast, "Speak Brave," has a Five Star rating on iTunes and reaches international audiences with messages of inspiration and hope. With over 144 episodes published and available for streaming, Mark brings cutting edge communication and leadership strategies for his listeners, worldwide.

He is one of Hollywood’s top story experts and consultants, and has used those same storytelling principles to help speakers, authors, entrepreneurs, and business leaders generate millions of dollars in revenue.

For 20 years Pat Dwyer has inspired and entertained hundreds of audiences around the world. Having worked, toured, performed and taught with comedic institutions The Second City, iO Theater, CSz Worldwide, Baby Wants Candy, and with the internationally renowned sketch comedy duo Kerpatty, Pat uses his experience to inject positivity, team mindset, creativity, playfulness and strategic levity into corporate cultures, educational institutions and organizations near and far. As a presentations and on-stage performance coach, Pat's myriad of experiences as a comedic director, writer and performer help speakers take their presentations to the next level. Not just helping speakers find their funny, but helping speakers find the magic moments in their programs. Learn more at PatDwyerWasTaken.com ...because it was.

Marie Loeffler is a popular Speaker, Trainer, Coach, and Solo Handbell Artist. After joining Toastmasters in 2011, she discovered her love of public speaking paralleled her love of ringing handbells and that led to the creation of 'Ringing True' where the combination of music and the spoken word offers a creative way to view leadership, team building, and being yourself.

Since winning 1st Runner-Up in the 2020 World Championship of Public Speaking, she has spoken in 32 countries about the power of voices and transforming the world with powerful messages. She is a Certified Ontological Coach with the International Coaching Federation (ICF) and coaches her clients to live a life of no regrets. Linda-Marie is also a Certified Experiential Trainer and the founding owner of the Transformational Learning Consortium. Her focus is on creating and delivering trainings that transform organizations and create sustainable cultural change. She is a visionary that gives people the tools to become powerful leaders right where they are. By giving people access to different ways of observing, thinking and being, they grow to be leaders from within…leaders in their companies…leaders in their communities…leaders in the world.

David Levy has been in Toastmasters since 2010 and a stage actor for much longer. Despite all his experience as an actor, it took him a while to get comfortable with public speaking. Once he did, however, he found that his time in the theater provided him with transferable skills for public speaking… skills that he has used in speech competitions, winning him 3 Humorous Speech Contest District titles and 3 appearances at the District level in the International Speech Contest (and 1 trip to the semifinals)! In this presentation, he describes his approach to incorporating body language and vocal variety when preparing a speech for delivery.

Lori Borre cut her teeth on lemonade stands at the local swimming club when she was six years old. She sold candy at school, Girl Scout cookies door to door, and marching band cheese and sausage. At one point, she even did outbound telemarketing and had more sales than the entire rest of the shop combined.
When she grew up, she traveled across the US and internationally for about 100 nights a year as a sales and customer service trainer and consultant for companies large and small. Some clients you may recognize include Ford, Saab, Ocean Spray, Pontiac, Qualcom, Compaq, PartyLite, Helene Curtis, McDonald’s, Roche Diagnostics, Nissan, RCA/Thomson Consumer Electronics, and many, many others.
Using her knowledge of sales, Lori quickly rose to the higher ranks of her current company. In her first six years of active enrolling, she earned five of the six contest trips that Young Living® created.
“It has been said that those who can, do; those who can’t, teach; and if you meet someone who can do both, you’d better listen up.” Using her wit and homespun humor, best-selling author Lori Borre has a message that just might change your life.

Do I have to attend Spring Conterence?

Only if you want to learn, have fun, and be a part of the TOASTMASTER Community.

How do I vote for District Leadership Candidates?

The President and Vice President Education of each club votes to represent their club in the Business Meeting. This years annual business meeting will be before spring conference.  Check the calendar for Annual Business Meeting, and make sure D11PRM@gmail.com is allowed in your inbox for updates.

What is The Masked Speaker?

Have you ever watched The Masked Singer and thought, “I wish I could play along?” Well, now you can (sort of). The Masked Speaker is a four-week long entertainment event for us to come together, listen to some epic speeches, and have some fun! Here’s how it works …

For four consecutive Wednesday evenings (April 27, May 4, May 11, and May 18) at 8 pm ET – 7 pm CT, we will gather on Zoom to listen to a series of club length speeches each presented by someone whose identity will be obscured by a mask and/or disguise. We will start with six (6) “Masked Speakers”. Each week, you, the audience, will vote for your favorite speech of the week. After the votes are tallied, the bottom two speakers from each week will have a short Q&A session with our emcee. Then, you, as the audience, get to guess who the two Masked Speakers are. The Masked Speaker who is “unmasked” by the audience the most that week, is eliminated.

How do I see last years, The Masked Speaker?

Go to this link to see the playlist:

TOASTx is making a comeback this year. Back in November 2019, at our last in-person Fall Education Day, we concluded the event with four “TEDlike” talks. Each speaker had 12-15 minutes to share an idea worth spreading. Unfortunately, it’s an event that never caught on via Zoom. Fortunately, we are getting back together, in person! We are hosting a one day live, in-person event on Saturday, May 21 from 10am-4pm in Indianapolis.